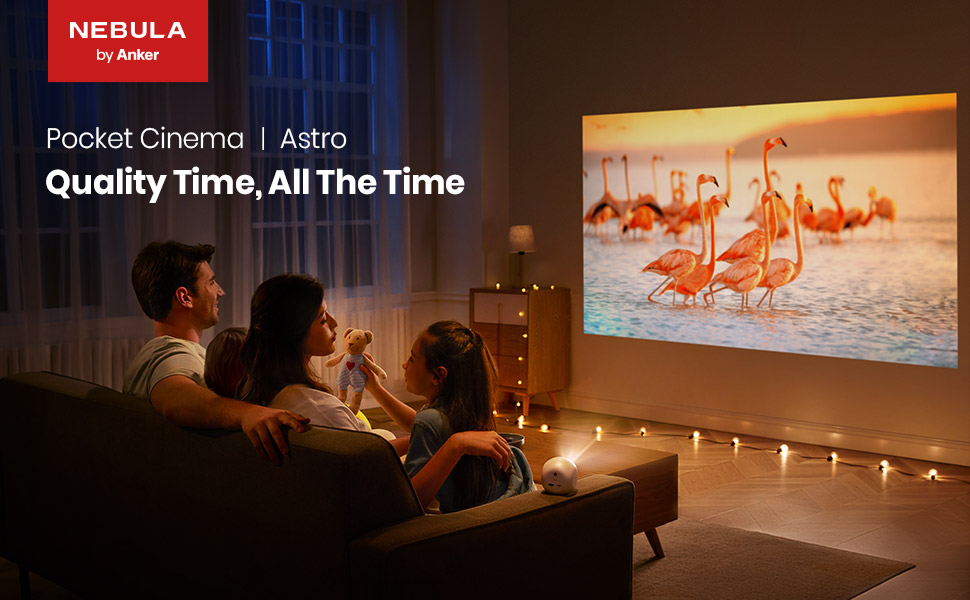 From a device the size of an apple, Astro has the power to project an image up to 100 inches big. Capture the spectacle of the movie theater, no matter where you are.

Expand Astro’s capabilities by connecting up your favorite HDMI, USB-C, and Bluetooth devices. You can even wirelessly mirror content from your phone via mirror cast and AirPlay.

All From the App

Misplaced the remote? Don’t worry, as you can control Astro right from your phone via the Nebula Connect app. Play and pause movies, browse menus, and more with a simple swipe of your finger.

Entertain Them with Astro While You Take a Break

Binge-Watch Netflix While the Kids Sleep

Introduce the Little Ones to Your Childhood Favorites

seriously this is a really good product. I don't really care that it is for kids. I am a kid too XD. but for the price I get everything, portability, great looking, functionality is great, picture quality is excellent. I wouldn't have returned it if it wasn't for the low hz for gaming.

This projector is extremely portable with an apple-size. I can take it to the kitchen, living room, and even the bathroom. The 2-hour battery life allows me to easily enjoy a more pleasant time in these rooms without any annoying cables. This projector is definitely not just for children as the title says. In fact, it is much safer for children to use due to the "eye guard Tech".
Note that the focus adjustment of this projector is manual, but the scroll wheel is sensitive and can accurately respond to your preference. After a week of use mainly in the bedroom, I am satisfied with the projection quality as long as you give it a flat enough platform, a stand may further improve its experience. In addition, the Type-C charging cable attached is a bit short, which matters when you want to use it while charging.

The nebula astro is indeed an extremely portable projector. Whilst the advertising leans towards a kids device, it is in fact a perfectly good device for kids and adults alike.

For me I wanted something which was less hassle to carry around and setup and this projector is great for that. It has battery life of around 1.5hrs in standard or 2.5hrs in auto mode(brightness adjusted to conditions), but the great thing is it'll run off any half decent battery pack. So you can literally power it for hours using one.

The picture quality is ok at 480p, I've no complaints as long as you accept it's 'sd' level of detail and it'll work on dark environments at around 100". It's bright, colorful and clear enough and is even ok with drawn curtains, but small font text is barely legible. The focus is generally also good and uniform but is very 'precise' to adjust which is a manual process. Sound is also good enough if sat close but you can easily pair up Bluetooth speakers or headphones if not.

It is very easy to setup, and has auto keystone correction which can also be set manually where required. It's interface is fairly snappy and straightforward featuring both kids and adult layouts which can be set as required. It's also very well made and of high quality so should survive a knock or two. You can even get protective sleeves.

For me the biggest let down is the smart interface. Already half the apps don't work properly if at all (can't play purchased content in YouTube, sky now won't load at all etc). Netflix does work but streaming is awful and blocky like it was designed for a 3 inch screen. However downloaded content is no issue. I don't have an issue with any other device streaming and have high speed wi-fi. Screen mirroring i only got working with my iPad not my android phone.

To sum up if you don't depend on the inbuilt smart interface and apps or screen mirroring the device is great and really does suit camping or outdoor portable use, devices plugged into hdmi work fine even when it tells you video may be poor quality (IE when it's downscaling). It's just let down by it's aging Android o/s with limited selection of apps that don't work well. Only unlicensed YouTube content or downloaded Netflix content have offered a useable experience for me. In all other aspects, I love it.

A
Anita Rooney
Really worth it !

Astro has a very mini shape and size, that's cool. And it also has content and battery, so it can be carried and used more easily. Especially the type-C interface, it's convenient to charge. All that was missing was the brightness is not enough, considering the size, not too bad. In a word, it's a great projector.